It's now 7PM and the day is finished.  What a day it was... The rain kind of blew our plans for the original location we had scouted on Sunday.  Instead, we ended up moving down the valley. This area was flat but regularly invaded by buses and ATV tours for tourists viewing the sets of Lost and other movies.  We found a flat stretch that was off the main road. The Kualoa Ranch folks were kind enough to bring up a backhoe/grader to flatten this stretch by removing the small humps of grass in the center. This part of the valley was a bit drier relative to the upper end due to the lack of an orographic effect. We had a small army of volunteers for the "pulling" jobs and we all huddled underneath a small shelter while small squall blew through. It wasn't long, however, before the crane and then the statue arrived.  The statue showed up on a flatbed truck bearing a monster wooden crate. Huge.

The crane lowered the crate to the ground and the freight moving folks opened up. Holy friggin'-cow. This is a huge statue. Both Terry and I felt sick to our stomachs at the idea of moving this massive monolith. What had we gotten ourselves into? 10,000 lbs? 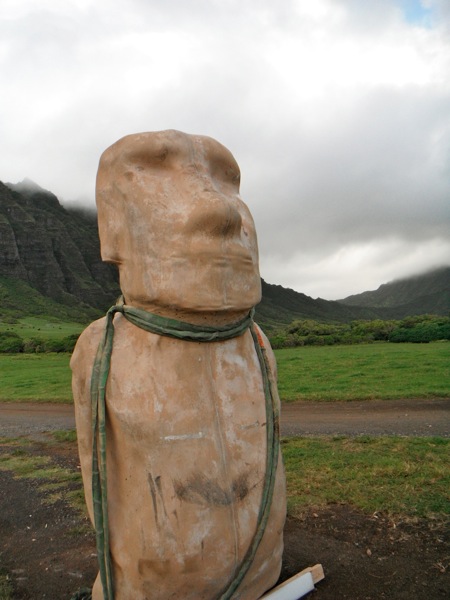 It was only a bit latter when the statue was lifted up and set on the ground that we realized that we had a serious problem -- the statue would not stand on its own.  Blargh!  The angle of the base is correct and the statue is a direct copy of the digital model I sent.  However, I had to wonder whether or not I had made a mistake somewhere. This was, of course, an eroded statue laying on the road.. and there had clearly been post-falling modifications made to it (cupules on the top of the head, for example).  Perhaps there was material lost on the bottom edge that was critical to the movement -- but now lost? We can't stick anything back on! Or perhaps we scaled something incorrectly. Or we had it all wrong to begin with.  I have to say, my head started to spin with possibilities... all dark and gloomy.

We took a break for lunch and thought about the problem.  There are a couple of scenarios that we could imagine.  First, it is entirely possible that statues that had fallen were somehow modified to make it impossible for anyone else to move them and therefore "cheat" the signal that the statues represent. After all, if you had moved a statue 4 miles and it fell just before you had it on the ahu, you wouldnt want someone to jack your statue and make away with all the effort you put into getting the statue that far... This kind of modification would help ensure the "signal" is honest --- a statue that made it to the ahu would be guaranteed to be transported from the quarry (or be substantially smaller if somehow the material were "reused").

Evaluating this idea requires looking in detail at all the road moai -- if they have some kind of modification that is consistent with prohibiting further transport, then this might be the case.

The only problem, though, is that the modifications that would have been necessary to make this statue lean at a crazy steep angle (20 degrees) did not appear to be some kind of hack-job. Instead the front edge (the part that presents the point at which the center of mass is behind (letting the statue stand) or in front of (causing the statue to fall) is uniformly curved and well shaped.  So if someone removed material, they did so with an eye to preserving the shape of the base).

The second idea - and one I think might be ultimately the case -- is that the statue were made purposely leaning forward beyond the point of vertical stability.  This might seem surprising but from the point of view movement it makes sense that the statue remain in a constant "unstable" state with rope restraints used to hold it back from tipping.  This way, the folks allowing the statue to move forward would simply allow forward movement and not have to "catch" the statue as it transitioned from its stable upright position to a forward falling one.  If the angle of the ropes were correctly positioned it wouldnt take an excessive amount of force to keep the statue tipped back. In fact, the flat nature of the back edge of the base is consistent with this idea -- the flat edge is perfectly shaped to provide a leverage point for the statue to be tilted backwards.  Given that we consistently see this shape, and that the shape is more pronounced on bigger statues (and since they could have made the back base shape in any way they wanted) the back edge goes along with this idea.

We also noted that the difference between standing and falling forward is small - just a single 2x4" piece of lumber is adequate to hold the statue upright  - the difference between vertical stability and falling forward is just a matter of inches. so perhaps... perhaps, the statues in transport were made to be unstable and that stability -- putting it upright for standing was done with a couple of flat stones wedged under the front.  In fact, we find such stones along the roads -- poro stones that are flat that could serve this function.  And the presence of such stones underneath statues (as noted by Heyerdahl during his excavations at the quarry in the 1980s) helps support this notion.

We rigged a rope around the statue's head so that we had an attachment point along the plane of the eyes -- this gave us the maximum leverage to restrain the statue.  The crane operator released the tension on the straps and we had 12 folks pulling back to hold the statue. It worked.  We played a bit with the angles and the pulling to see if we could get the statue to rock and tilt side to side -- this also was successful.  So we might be okay.  In fact, thinking about it I had to remind myself that the prehistoric Rapanui moved this exact statue (or rather a 2x version of this statue) about 3 miles from the quarry before fell. Sure, it might have fallen, but the shape was adequate to get it that far. So in many ways, we need to remember that the shape the statue has is a product of prehistoric Rapanui engineering -- the shape is not from our imagination but theirs -- and they were able to move them.  Our problem is simply figuring out how this might be done given the form of the statues as we see them.

It is certainly easy to forget this point when you are looking at giant 10,000 lb (well, 9,600 lbs according to the crane operator) cement statue towering over one's head.  It is easy to doubt that the shape is "correct" -- but there is really no reason to think that it isn't. Trust in the ancestors.

Tomorrow we will do some rope configuration -- likely we will move the ropes to attach along the upper chest area.  This wide point will provide us leverage to rotate the statue as we tilt it.  We might need more than 2 ropes but that will be our starting point. We can start from there.

It is now.. of course... beverage o'clock.  At times like this, I find a bit of Bombay and Tonic to be quite efficacious.

this is awesome to see! can't wait to hear more.
Max Beach