The NOVA documentary has finally aired on PBS!  If you missed the showing on November 7th, check out the full movie online.

Posted by Unknown at 3:20 PM No comments:

As Im getting ready for the Nat Geo talk this week, Im also trying to anticipate field work on Kauai that is beginning Monday (but I won't arrive until next Saturday). One bit of electronics that I've always wanted is a data logger that records location, orient 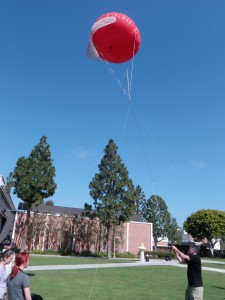 ation, tilt, yaw, bearing, and magnetic readings in a precise and rapid way. This would be useful, for example, for logging images of taken from a blimp so that they can be better corrected and georeferenced.  More importantly, a data logger such as this would be ideal for the GPR -- one could record the antenna angle and orientation relative to the ground so that the data can then be correctly modeled to take into consideration the direction the antenna is pointed.  Lacking this information, one assumes the antenna is pointed straight down -- but we known when we go across any terrain that this isn't true. Even when the terrain is relatively flat, there are often bushes and other kinds of things that one has to go over and that can create artifacts in the data. Dean Goodman's software GPR-slice software can make use of topographic information to help correct for terrain changes -- but this is only going to handle very large changes (such as surveying over a mound or down a hill).  What we really need is a little box that sits on the antenna and that records the position and orientation as the antenna moves.  And if we can also collect magnetometry data - boom - we have an instant mag map

The way to do this, I think, is with an arduino board and some sensors. I got an Arduino Mega 2560 board from Adafruit.  I then added a SparkFun triple axis magnetometer, 6 degrees of freedom accelerometer, an OpenLog data logger and the adafruit ultimate GPS.  All for about $150.00.

I started using the incredibly cool Fritzing tool (http://fritzing.org/) which provides means for creating wiring diagrams and electronics.  The tool has many of the breakout parts for the arduino ready for cutting and pasting and the user libraries are huge.  What is particularly cool is that one can create an electronic device and then have it manufactured. I guess they aggregate bunches of board designs together and then get them printed en mass as some German factory. Cost is per board and goes down the more one orders.  So you can do some DIY stuff to try things out and if it works well, you could mass produce the boards to your own specs.

Following the excellent wiring diagrams on Adafruit and SparkFun, I created a device that put all these pieces together (below). My wiring isn't particularly well organized but I was more interested in tracking the places to connect the wires for the multiple devices. 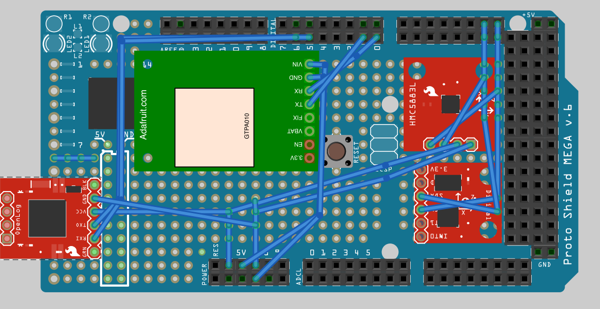 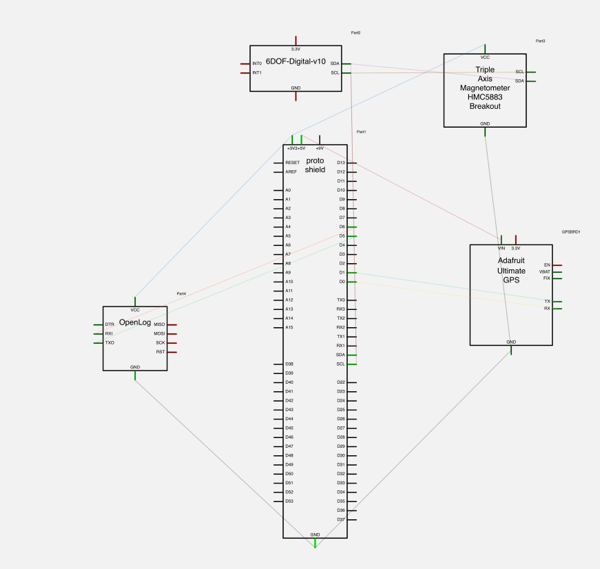 This is actually my second device for arduino. The first was a simple one built on a Arduino Uno board. All it does right now is runs a program that sends 5 volts in a particular pattern of timing to one of the output pins. Two mini-USB cords are connected to this pin (and ground) and plug into two digital cameras (Ricoh GR III).  One of the cameras has been modified to shoot near IR photos (and has a yellow filter). Together they provide a poor-man's four band (R,G,B, + NIR) camera.  The Arduino device triggers both cameras every 3 seconds -- this way we get synchronized shots that can be then be merged to form a single 4-band image. It works quite well - runs off of 3 AA batteries, is light weight and hangs from the camera mount that is suspended from our blimp or kite (or hexacopter).  I might add a GPS logger to it as well so that we can use it to record locations for each photo pair - that wouldn't be hard or very expensive. I bought an SD card logger ($20) for the Uno and wired it up. All I need is to get another Adafruit Ultimate GPS breakout (for $25).

I should mention that the Adafruit Ultimate GPS is pretty sweet. It has a built in logger (64K), can track 66 satellites at a time and do 15 measurements a second. Plenty for the kinds of applications we have...

Email ThisBlogThis!Share to TwitterShare to FacebookShare to Pinterest
Labels: blimp

We've been working all week to get the NSF-REU program off the ground. Students arrived in Long Beach on the 17th and over this past week we have been introducing them to research, geospatial analysis, image analysis, object based classification, structure from motion, XRF, multispectral analysis and so on. Its been quite a week of lecture and exercises.  Below is one of the images we are working with to attempt to extract the patterns of prehistoric agricultural practices -- visible faintly as geometric patterns in the crops on this southern chunk of Kauai. 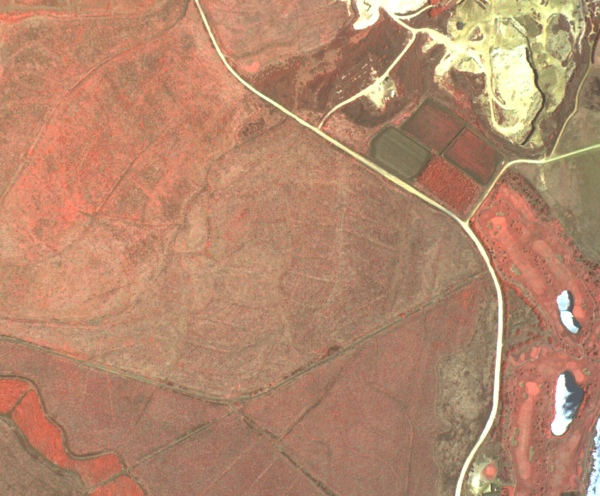 The students come from a wide range of locations and have a diverse background. We have asked them to write a daily blog of their activities so you can follow along by going to:  http://www.csulb.edu/geography/nsf-reu/  The blogs are linked on the left hand side of the page.  These should be come even more entertaining this week as we depart for Kauai early tomorrow morning and begin field work!

Posted by Unknown at 3:29 PM No comments:

This is linked on NPR right now but few folks can boil down the essence of science to a short set of clear ideas like Richard Feynman.
Check it out here.

The remark which I read somewhere, that science is all right as long as it doesn't attack religion, was the clue I needed to understand the problem. As long as it doesn't attack religion it need not be paid attention to and nobody has to learn anything. So it can be cut off from society except for its applications, and thus be isolated. And then we have this terrible struggle to try to explain things to people who have no reason to want to know. But if they want to defend their own point of view, they will have to learn what yours is a little bit. So I suggest, maybe correctly and perhaps wrongly, that we are too polite.
Posted by Unknown at 7:33 AM No comments:

Email ThisBlogThis!Share to TwitterShare to FacebookShare to Pinterest
Labels: science

One of the most common complaints that I hear about our major (from faculty and students) is that it doesn't train students to do anything. Yes, this goes against the "4-field/allow no specialization" mantra, but it is stated again and again by our most ambitious, talented and smart students.  The reasons for these complaints are clear: we fail to offer a coherent set of classes that provide in-depth training (laboratory and field as well as conceptual/critical) in the areas of the discipline that require them (and for which there is abundant demand) and we have gotten rid of the classes that used to make us a notable department.  Now with the exception of just a few classes, we offer a fairly useless major – like most anthropology departments.

The reality of where we stand is made clear through this NY Time Op Ed piece and this recent AP study. Those students who get majors who are not trained to do anything (I.e., "4 field") are the least likely to get jobs.  The anecdotal and statistical evidence is consistent.  Although a taboo topic in faculty meetings, this is a serious problem that should be addressed one way or the other. Solutions should be implemented: — I.e., bringing back a range of in-depth courses in field, lab and analysis in specific aspects of sub disciplines with pre-requisites and specialization. Sadly, in our department at least it doesn't appear that such a discussion will be allowed to take place.  Tragicomedy for our students at their own expense….
Posted by Unknown at 9:26 AM 1 comment:

Anthropology and Geography undergraduates -- as well as others interested in the study of landscapes-- may be interested in a new summer field program on geospatial research and mapping (GRAM) that will take place at the National Tropical Botanical Gardens (NTBG) on Kauai this summer.  This field research program is a joint effort between faculty in the Department of Geography and Anthropology at CSULB and is focused on the use of cutting edge geospatial techniques (e.g., satellite and aerial imagery, the use of UAVs, geographic information systems, spectral analyses, topography generation, landscape analyses, near surface remote sensing, etc.  The research being undertaken by GRAM includes the study of prehistoric landscapes as well as contemporary resources and environments. A website is now operational (http://www.csulb.edu/colleges/cla/departments/geography/nsf-reu/)  that describes the program and includes an application form, details about the the NTBG and so on. This field training course is funded for 3 years via the National Science Foundation (NSF) under their Research Experience for Undergraduates (REU) program.
This year's GRAM project will take place June 11 to July 7 and include training in Long Beach and the National Tropical Botanical Gardens in Kauai. The NSF-REU program provides funding for student to cover travel, housing, tuition costs as well as a small stipend. Applications are competitive and open to undergraduates across the country. Note that students must be enrolled as undergraduates in order to meet the requirements of the REU program -- graduated seniors are not eligible per NSF rules.

For information about the program, the application, schedule, etc, please see: