While working on a presentation about cultural transmission, I did some exploration in the archaeological literature about patterns of word usage over time. The patterns are about what one would expect. Here is a graph of the occurrence of "social" and "ecology" by decade in the pages of American Antiquity from 1936 to the present. This is, obviously, telling us something about the nature of discipline. Conclusions are left to the reader. Posted by Unknown at 2:38 PM No comments:

I just returned from a trip to Pullman, Washington and WSU. I was there as the 2009 Anthropology Graduate Organization (AGO)'s visiting scholar. It was an honor as it indicated that at least some students have heard of my work and that enough felt it was significant enough bring to campus. I had a delightful time. The students were enthusiastic and interesting. I was shepherded around from meeting to class to meeting to meal to lecture. And I got to talk with a wide variety of folks from the many grad students to the faculty. Pullman is certain "as advertised" in its remote, small town setting but the fact it is so isolated seems to select for folks who are extremely passionate about what they do, and that always translates into a vibrant and exciting community.

My lecture was "Networks, Small Worlds and Cultural Transmission." Given the nature of the invitation, I targeted it at graduate students and probably tried to include far to much about the relations between our models, methods and explanation but it certainly was fun to present for me.

All-in-all it was an excellent visit and I hope to see many of the folks I met there again either here at Long Beach, the SAAs or elsewhere.

Posted by Unknown at 6:32 PM No comments:

I've just learned that Steve McCormick one our long-suffering graduate students passed away late last week due to health problems. Steve was a graduate student when I first arrived at CSULB. He completed his course work and was slowly attending to his MA thesis. He began working for Cogstone, a local CRM firm on a fulltime basis and like many students, the reality of a real paycheck and actually doing archaeology on a professional basis moved his interests away from his degree. As a student, he asked lots of questions and had tremendous enthusiasm for the discipline and its practice. Steve was an extremely friendly and genuinely nice person and was well liked by the faculty and the rest of the students. He spread the reputation of our MA program among contract firms and help get a number of our students jobs at Cogstone. I can definitely say he will be missed. This is very sad news. 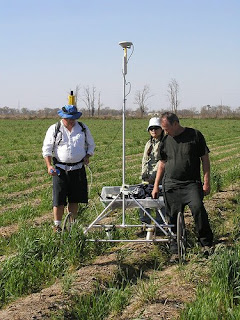 Steve McCormick (left) with Dan Larson and Sachiko Sakai in the field (SE Missouri) using the magentometer and GPS. 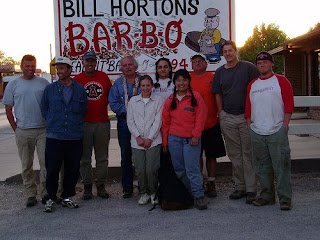 Steve McCormick (just below the pig and in the red shirt) with students from CSULB, RC. Dunnell, Dan Larson and MIke Cannon.
Posted by Unknown at 2:36 PM No comments:

Email ThisBlogThis!Share to TwitterShare to FacebookShare to Pinterest
Labels: CSULB

I have been working on a new camera rig for the new 15' blimp (Floatograph) we recently purchased with Geography. Geography also bought a series of new cameras: 2- Canon Powershot (A590 - 8 megapixel and image stablization) and 2 Fujifilm FinePix IS-1. The latter is particularly interesting as it records near-infrared in addition to visible light (wavelengths 400-900 nm). We also got a battery powered video transmitter that can be used to send NTSC video output from a camera to a ground receiver and displayed on a monitor.

Using the Airtronics VG400 for the controller, servos and transmitters, I created new mounts for the cameras. The mounts are simpler than earlier versions as I realized that some of the design considerations that John Dudgeon had used were specifically for flying cameras with (the much more volatile kites). I also was able to place some of the "common" components on the picovet suspension.

Below is a photo of the rig as I was nearing completion. I added means for tiling the Canon Powershot cameras out to the sides - so that we could get overlapping images and wide coverage. The near-IR camera is in the center. Since it had a cable release socket, I used a cable to trigger the IR shutter combined with the radio controlled servo. I need to beef up the hanging parts of the picovet and replace swivels and whatnot.

I am excited about trying this out.